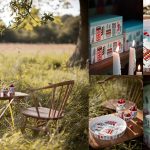 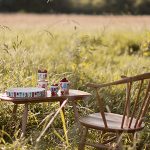 The inspiration for this range came from a rainbow memory from childhood . This range of ceramic and tea towels came beautifully packaged in reusable boxes with the Tingleby story on the back. The range was sold in over 400 shops worldwide. There are still some pieces of this range available in the Isak web shop.

All the little people scurried inside. The sky let out a monstrous roar just before it’s rain came gushing down on earth. Drops as big as cloudberries rolled off the roof tops and made muddy rivers on the road. The rivers made puddles for very happy, welly clad little feet. This was a normal day in Tingleby.

All the village children put their faces into their hands and pressed their noses close to the windows. The first one to spot the rain to stop got a sweet. The first to spot the sun come out got two. The first to spot the rainbow got all the gold… If the wait was too long they lost their patience or if the smell from the oven became too tempting and the hunger in their bellies became too distracting; they would leave their posts and come back later. The clouds sighed goodbye and the sun smiled hello. The rainbow promised gold to all the little people.

At a first tingle they would run out onto their porches, sniff the air and then quickly run as fast as they could out in to the woods. They would grab their bows and arrows and their carts and dollies. All their childlike treasures. Then they would run. Run as fast as they could. The cart with all their things jumping up and down, toys flying off at the high speed. Nails and worms flying out of the boys pockets and hair clips and seashells falling from the girls hair as they ran. Fast. So fast. Quick! Quick now! First to the gold! As they got close there would always be slight confusion as to where the gold was and where the rainbow had disappeared to but then, there, all of a sudden, were the golden chocolate coins.

With limbs heavy as potato sacks ,minds jumping with new thoughts and bellies full of gold they all went to bed. First there was a tingle, it started at their feet, then travelled all the way up through their bodies and when it reached their faces it made them smile. And with smiles on their faces, all the children of Tingleby fell asleep, all exactly at the same time. They floated in and out of each others thoughts and journeyed together into an imaginary land of dreams; continuing their nighttime adventures where the daytime ones had ended. Every night, all the Tingleby children shared the same dreams.

The Tingletroll smoked a pipe he had carved out of driftwood, old and knobbly like a troll’s knees. In the shadow of sunset when the mushrooms started humming and the toadstools started singing; he set to work. In his cauldron, brewing up tonight’s dreams for the Tingleby children, went the sea snake and the boatmen and the frog’s bottoms. All the things the children had left behind and forgotten. In they went. Into the dream soup. It boiled away all night long and when the last vapors had wisped away and the cauldron sat empty; a new day rose in Tingleby.